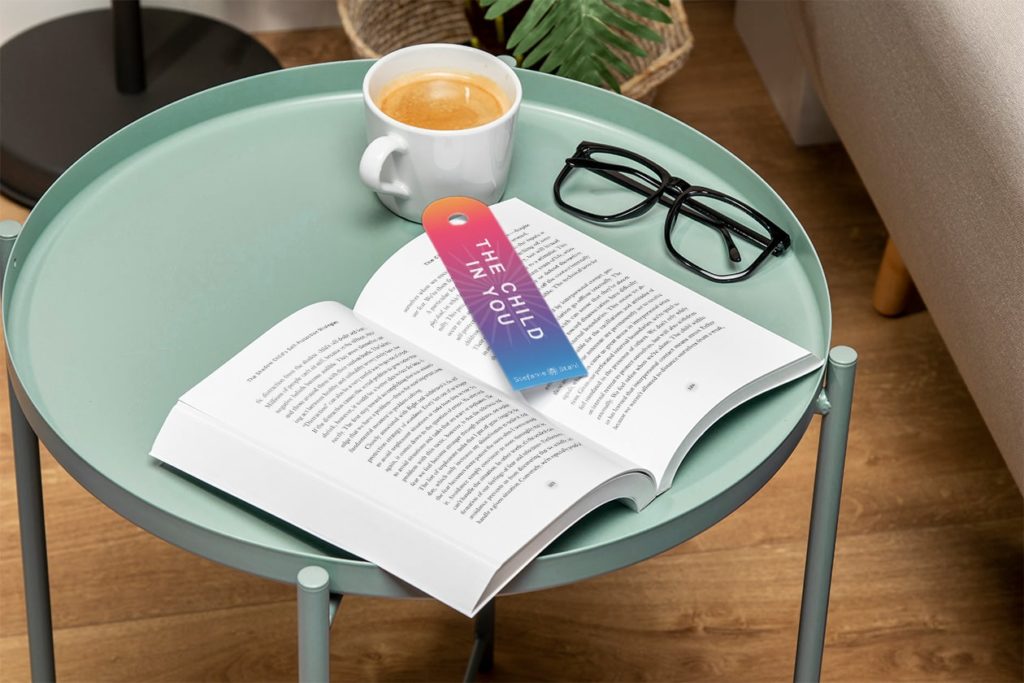 In my 30 years of work as a psychotherapist, I have repeatedly observed how people’s self-image plays a vital role in all their relationships. It determines the way they view other people and how they behave towards them.

The epicenter of everything is self-esteem. It is the source and nourishment of our psychological resources.

In my experience, all psychological issues follow a clear underlying structure: the cause of any problem that one has with oneself or with others is based on that person’s perception of reality.

The ways in which we perceive ourselves and the world are strongly influenced by our childhood experiences. We do not consciously remember many of these experiences, yet they are deeply buried in the unconscious and shape our personality. These childhood imprints – both positive and negative – are known in psychology as the ‘inner child.’ On the unconscious level, our ‘inner child’ has a vital influence on our self-image and our perceptions.

Beliefs arise during childhood and have long-lasting effects on our self-image.

Here is an example. If a young woman – let’s call her Sara – thinks about herself ‘Im not good enough, I’m inadequate,’ she will often see other people as being superior to her. The fact that she feels inferior will have far-reaching implications for the way she creates her relationships. The fear of being rejected by other people because of her perceived inferiority will have a considerable impact on her personal experiences, motivating her to do particular things or making her avoid having to do certain things.

Sara’s beliefs of ‘I am not enough’ and ‘I am inferior’ define her self-esteem and affect how she manages her life and relationships. She makes determined efforts to live up to expectations. She wants to have everything under control. She strives for perfection, and is slim, stylish, and professionally quite successful. But she rarely feels that she is being who she truly is and lives in the constant fear that others might notice how inadequate she really is.

But where does this deeply rooted belief come from?

In Sara’s case, her ‘beliefs’ and the resulting self-preservation strategies (striving for perfection and control) are due to unhealthy formative influences in her childhood.

Sara’s parents – in their good intentions to support her – set narrow boundaries for her and often criticized her. This has resulted in Sara’s belief that she is inadequate. Her mind has been programmed that she must work hard to please other people. This presumed certainty functions like a kind of lens through which Sara perceives herself and the world. 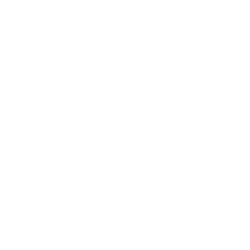 What others say about the concept

“Fantastic… one of the strongest titles I’ve read in recent times. I couldn’t stop nodding as I was reading it – it totally resonated and falls in line with a lot of the research I was doing for my next book. I wish I’d read it earlier! It’s almost impossible to read this book without contemplating your childhood and identifying areas for expansion and healing. Stefanie’s practical, informative, inspiring and highly-accessible approach to addressing psychological phenomena makes this book a hit in my eyes. I highly recommend people buy this book and do the exercises provided.”

Vex KingBestselling author of 'Good Vibes, Good Life'
“Stefanie Stahl is compassionate, clear-eyed, and insightful, and her paradigm for getting in touch with your inner child puts your truest self within easy reach. The Child in You is like your own personal therapist that you can carry around with you.”
Lori GottliebNew York Times bestselling author of 'Maybe You Should Talk to Someone'
“For anyone who goes on a personal growth journey, it is impossible to reach full wholeness without inner child work. This breakthrough guide is a must-read for anyone who is committed to healing, happiness, and full health. Stefanie Stahl offers effective strategies to help you trust yourself so you can live a fulfilling, authentic, connected life.”
Shannon KaiserAuthor of 'The Self-Love Experiment' and 'Joy Seeker'
"Stefanie Stahl has the unique ability to address both the mind and the heart in a way that is simple, clear and practical. Her books have helped millions to navigate emotional turmoil and intimate relationships with more maturity and ease.”
Vivian DittmarSeminar host, author and founder of the foundation 'Be The Change'
“This book is a revelation. I can see why so many people all over the world have found in it a path to happiness, self-love, and fulfilling relationships.”
Marci Shimoff#1 New York Times bestselling author of 'Happy for No Reason' and 'Chicken Soup for the Woman’s Soul'
"Not only will you read this book more than once, but it will also become a lifelong companion."
'Psychology Carries You Forward'Magazine
„Like no other, Stefanie Stahl has the gift of portraying complex psychological issues in a graphic and catchy way. With her model of the shadow and sun child, she has helped millions of readers to strengthen their self-esteem and develop more zest for life.“
Jens CorssenDegreed psychologist, business coach and author
"The book has been a ready-made and well-structured aid for patients in my practice for almost 5 years. The exercises are simple, practical and very effective. This concept is completely sufficient for a short-term therapy with very good and measurable success. Structurally depicting the sun child and shadow child helps patients to deal with their childhood problems quickly and effectively."
Dr. YakovlevSpecialist for psychiatry and psychotherapy
Previous
Next

It is important to bear in mind that this inner programming is arbitrary. It has nothing to do with Sara herself. If Sara’s parents had handled her differently, she would have internalized different beliefs. Each of us has undergone a particular programming in our childhood. We’ve all developed particular beliefs that have molded and still influence our inner child.

In every human there is a shadow child. The shadow child embodies our problematic imprinted programming.

In my approach I distinguish between the shadow child and the sun child. 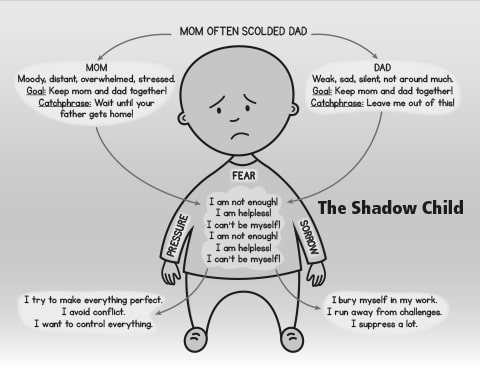 The shadow child embodies our problematic imprinted characteristics: the negative beliefs and the resultant burdensome emotions. 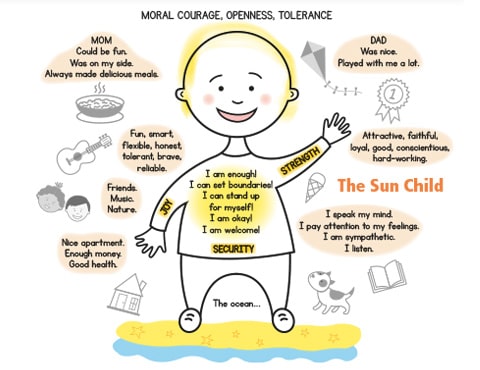 The sun child represents the positive aspects of what we have gotten from our parents. It’s a metaphor for the intact part of our self-esteem.

The shadow child embodies our problematic imprinted characteristics: the negative beliefs and the resultant burdensome emotions that affect our psyche on an unconscious level.

The adult ego, in contrast, is the psychic entity that incorporates our rational mind. The adult ego acts consciously and is capable of regulating the inner child. Though some people can use their adult ego to accurately reflect on their negative imprinted characteristics, this is not sufficient for them to release themselves from their old, deep-seated programming.

The sun child represents the positive aspects of what we have gotten from our parents. It’s a metaphor for the intact part of our self-esteem.

In my work as a therapist, the sun child – and this is quite important – is also a symbol for everything that we ourselves can reshape as adults.

When you understand the structure of your own personality, you can resolve problems that seemed intractable before.

Many people fear that a therapy is time-consuming and painful. In my psychotherapeutic work I take the approach that it is by no means essential to completely come to terms with one’s childhood and to process all the inner wounds. On the contrary, this could even be counterproductive, because the mind might focus more and more on the negative experiences.

It is entirely adequate to understand the common thread, that is, to develop a basic understanding of the imprint you have experienced. In Sara’s case, for example, she is aware that she harbors a shadow child within her plagued by many self-doubts as a consequence of the severity of her parents. 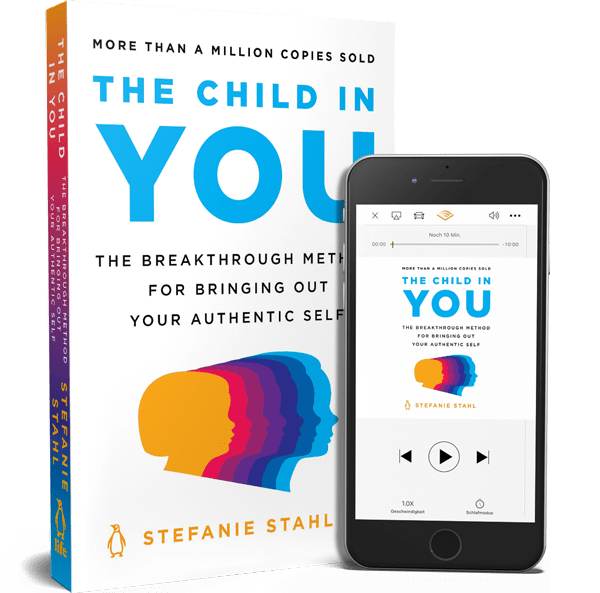 In my book The Child in You Must Find Home I explain how to become acquainted with your shadow child, how to identify your negative beliefs, how to reinforce your adult ego, and how to come into contact with the sun child.

You will get an initial impression of this in the DOWNLOADS section.

The child in you

“A thousand thanks for this simplified path to discovering your inner child. I have used this therapeutic model in my practice to excellent results. In fact, in a recent seminar, a 73-year-old man broke out in tears and stammered: ‘All of my major life decisions are becoming clear to me now.’ He put his wife’s hand over his own, clutched both to his heart, and promised his inner child: ‘I will heal us before our life on earth is over.’ ”
– Hilde Wiemann, Certified Family and Relationship Coach

If you’d like to chat about my work, get more news or learn how to integrate the concepts into your life, get in touch!